Not the tough, tough Tanami Track ordeal it once was, now it’s a generally fair unsealed road. It’s just a long way between settlements, ie, 580km from Yuendumu to Billiluna now the Rabbit Flat roadhouse has closed on 31 December 2010. The Northern Territory section of road is usually in much better condition than the more sandy WA side due to the combination of the road trains servicing some of Australia’s most productive gold mines along the route from Alice and Federal Government money. Be prepared for creating a major surprise for the other, four wheeled, tourers when they encounter someone travelling on a bicycle.

Alice Springs, Northern Territory to Halls Creek, Western Australia. There’s the possibility of a sidetrip to Wolfe Creek National Park that is worth the extra effort required.

1075km. Unsealed except for 189km from Alice to Tilmouth Well roadhouse, an unexpected 10km stretch in the middle of not much, and the last 18km into Halls Creek along the highway. The Wolfe Creek side trip adds an extra 22km each way.

April to October. It’s way too hot and wet in Halls Creek in the Wet Season or Alice in summer. Travelling south to north makes use of the normal prevailing winds. 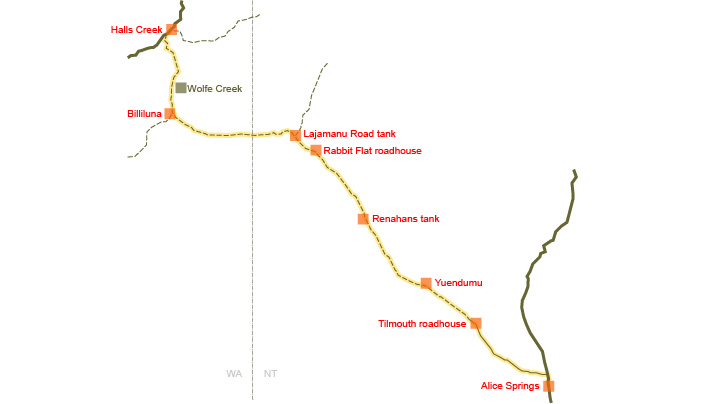 The first 20km is on the busy Stuart Highway. Then 169km of single track sealed road to Tilmouth Well roadhouse. A few kilometres from there you make the acquaintance of the dirt road and it’s not so bad after all. Other than the regular roadtrains and sporadic 4WDs you have the whole road to yourself to avoid any of the soft areas. Some of the road up to the NT/WA border is like travelling on a clay tennis court. Who claimed that this was tough? After the border in WA the road is a lot softer with some short stretches of pea sized gravel or longer bits of soft stuff. It’s possible to avoid some of this by getting onto the much harder embankment but progress by this method is slowed by the occasional drainage channel. The worst section is around the Balgo turnoff where it is soft from side to side and some patience is required. Fat 2.00” tyres at low pressure help get through. It’s easier past Billiluna although there is a rocky section as you start to strike the southern part of the Kimberleys. The Wolfe Creek excursion is universally considered the most difficult, corrugated, then a long sand pit. Here’s a suggestion: ride along the fence line for the last section. The last 18km into Halls Creek once you hit the highway is sealed with a decent shoulder. There’s even some traffic.

In the Northern Territory water isn’t such a big issue. There’s Tilmouth Well roadhouse and Yuendumu to fill up. There’s a big watertank halfway to Rabbit Flat at Renahans Bore and another you won’t be able to miss at the turnoff on the Lajamanu Road. You have to carry a lot of water from that water tank at the Lajamanu Road turnoff until Billiluna, 238km away. You need the capacity to take about 25 litres each, (man, that’s another 25kg), to last three days riding and two nights out to get between these points. But at least there’s a fair amount of tourist traffic and the off road campers usually carry a spare 100 litres or so if you want to flag someone down. The newish Coyote mine will let you grab some but it’s not far over the border. From filling up at Billiluna not much is available until Hall’s Creek although there is a farm watertank where water could be taken about 45km north of the Wolfe Creek turnoff.

Coles and Woolworths supermarkets with nation wide pricing in Alice; takeaways, and beer, only at Tilmouth Well roadhouse; 3 patchy community stores at Yuendumu; Rabbit Flat roadhouse has closed permanently on 31 December 2010. Good community store at Billiluna but check the sporadic opening hours. They have a siesta during the week and close from lunchtime on Saturday until Monday morning. Two IGA style supermarkets open 7 days until 7pm in Halls Creek to service the 4000 population.

In Alice Springs there’s quite a number of caravan parks and two backpackers to choose from. Annie’s Place backpackers is good value at $18 pp including brekkie and Mulga who runs the place is a decent character. Sometimes a bed is really appreciated. Paid campsites at Tilmouth Well roadhouse, $12 pp (2009); Rabbit Flat $5 pp, but closing 31 December 2010. Wolfe Creek National Park, toilets only, no water. Otherwise great bush camping out in the spinifex. Camping is not allowed in the aboriginal communities of Yuendumu and Billiluna.

Climb a hillock near the road to get some elevation and a fantastic view. The Warlukurlangu art centre at Yuendumu is one of Australia’s most known centres for a colourful style of painting. They sell 600 paintings a year mostly on the internet. Well worth a look. There’s some big boulders north of Yuendumu. Bruce and Antoinette at Rabbit Flat are a colourful couple with some great stories, an explicit language caution should be made at this point, but due to advanced age, bureaucratic inflexibility and, umm, a combative couple of personalities they are closing their roadhouse and its services. Wolfe Creek is a recent meteorite crater just 22km off the main track. Worth a view at sunrise despite the rough road in, it’s the worst section of road on the Tanami.

Rabbit Flat roadhouse closed for any services on 31 December 2010. Might be able to pick up some water there if desperate from Bruce. Plenty of plenty big road trains south of the Tanami Mine. These are the 4 trailer ones filled with diesel (or was it beer) for the mines. Some soft road that’s hard work from the Western Australia border to the Sturt Creek crossing near Billiluna. Carrying sufficient water is obviously an issue but there is generally some traffic, 20 to 50 4WDs a day to cadge off if desperate.

These 26 images give a general impression of the road conditions you are likely to encounter on the track.